In the small world of North American ski-touring and ski-mountaineering, Dynafit is known moreso for its bindings then for its boots. With the introduction of a new line of boots for the 2007 – 8 season, this state of events may change.

The line of boots is named Zzero. That rather awkward name is perhaps the least confusing part of Dynafit’s nomenclature. Are you ready for this lengthy turgid explanation? Perhaps take a deep breath and sit down.

Let’s use the Dynafit Zzero4 C – MF as an example. As I said, Zzero is the name of the entire line of boots. There are 4 buckles on this boot. There is also Carbon. It has a MFor Multi-form liner (as opposed to the lighter thermo-form liner designated by the TF symbol).

Unfortunately Dynafit does not yet have an online catalogue on its website on this date. Please see the links cited above for further information and technical details about the boots and also hosted here on my personal website is an abstract of the Dynafit catalogue containing information about the boots. 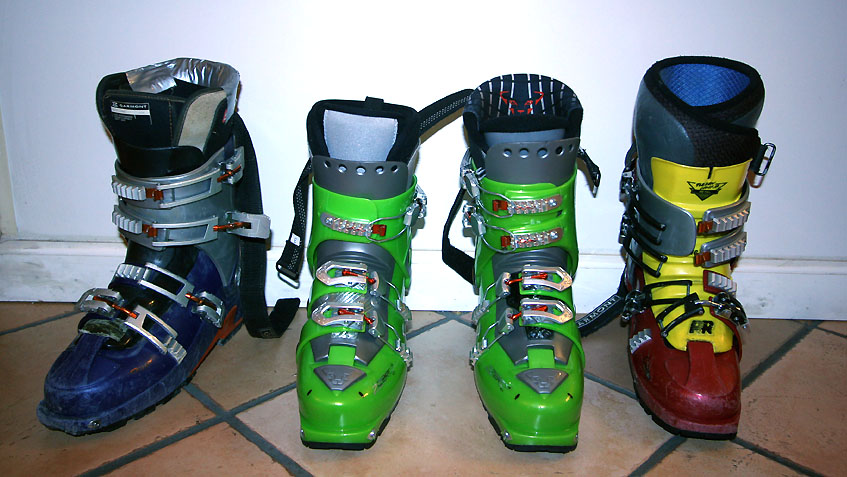 I will provide impressions of the boot’s skiing and touring ability by comparing this boot against other alpine touring boots that I have recently used; the Garmont Mega-Ride, Garmont G-Ride and the Scarpa Spirit 4. I will not review the technical features of this boot, its construction method or boot-fitting in detail – that is not the primary purpose of this review. I intend to concentrate more on the subjective feel aspect of this boot as opposed to quantitative measures.

Since both Dynafit Zzero boots are "big" boots, I skied them with the following relatively big skis:

I used these boots in a variety of conditions over a period of three full days including groomers, cut-up powder and slush on a ski-hill, white-out touring on a glacier in heavier snow with assorted slide-debris and heavy snow on a hard underlying surface on a ski-hill and backcountry.

You should know some of this reviewer’s background for further context. I have ski-toured for about 12 years, starting out on leather telemark boots and three-pin bindings and since migrating/evolving towards alpine touring setups consisting of Fritschi Diarmir Freerides and Dynafits with a variety of skis. My touring time mostly consists of day-trips with two or three multi-day short traverses during a season.

I weigh 160 lbs and ski mainly in the Coast Mountains of British Columbia in the Vancouver/Whistler/Squamish area. Local mid-winter snow is usually of the higher water – content variety therefor necessitating bigger skis and bigger boots. Having said that [ Because of this], for almost all the tours I do, I would trade downhill performance for uphill performance.

Now that I have my biases out of the way, on to the review.

Both Zzero models are built like traditional alpine touring boots with overlapping cuffs, a tongue and a vibram-covered rockered sole with an articulated walk mode in the heel. To minimize weight both boots use Pebax plastic extensively in construction and magnesium buckles. Carbon stringers on the bootshell and the tongue add stiffness and look pimp. The manufacturer stated weight for the Zzero4 in my size 27.5 with TF liners is 1585g per boot. The ZZero3 I tried weighed in at 1430g. This compares with my own boot, a 4 buckle Garmont MegaRide (modified with Scarpa Tornado tongue) weighing in at 1650g per boot.

There are two different liner choices available. The Multi-form liner is billed as a hybrid between a conventional and thermo liner and has lacing. The Thermo Form liner is your basic well-built thermo-formed liner with no lacing and is lighter (260g as opposed to 360g for the MF liner – manufacturer stated weights). Neither liner has ribbing or grips built onto the bottom as do newer Intuition liners; which would have been a useful feature in case you want to use your liners in a hut.

The boot has two lean modes when switching to ski mode – 15 and 21 degrees. The walk mode switch is small and may be difficult to operate with bulky gloves.

As expected, construction details appear top-notch. I did not have the boots for a sufficient length of time to comment on durability. 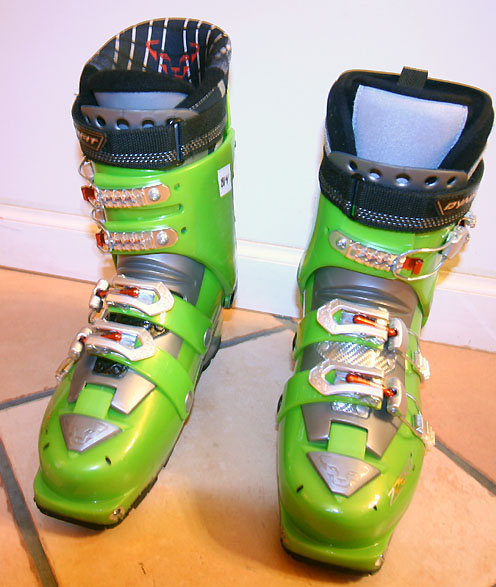 How Do They Ski?

Longer answer: no disrespect to marketing types but when someone tells me that they’ve made a boot that is both stiffer and lighter then any other boot in the market, I roll my eyes, mouth "yeah right" and ask for more kool-aid. This is one of the odd times when the marketing hype lives up to reality. The Dynafit Zzero 4 buckle is alarmingly stiff and imparts tremendous control in downhill situations albeith with some caveats.

To give further colour to my comments, I first tried these boots on with my stock Garmont liners that are packed out to plastic-bag thinness. I literally could not get the buckles on the Zzero4 tight enough using this liner so had to stay centered and not pressure the boot-tongue with forefoot pressure. I then proceeded to rip lines down Whistler Bowl then the Saddle doubling up chopped up soft bums and railing carved turns at mach – speed on the groomed trails. Simply put, the lateral rigidity of the boot is comparable to my alpine boots. Obviously they are much stiffer then my Mega Rides in this regard.

I thought I should try the boots with proper liners that fit so took them out in what can be best described as elephant snot snow in lower elevations and chopped up powder up higher. The boots were a revelation in these circumstances also, imparting tremendous control to this skier. Descending through a white-out from backcountry towards the ski-hill I had unbuckled the bottom two buckles on the boot for a bit of comfort and inadvertently hit some wet-slide debris. No problem with control or bringing the skis back under my body. Again, using my Mega Rides I would have been struggling quite a bit more.

This illustrates the caveat to which I had alluded earlier. These boots are almost too stiff in the sense that there are no compromises when skiing; they are powerful boots, for powerful, aggressive, big skiers. The stiffness engages quickly and there is an absence of that intangibility in progression when the boot engages its power. If this boot were a car, it would be a constantly growling dragster. The power is either on or off. There is no in-between. If this sounds at all intimidating, then so be it! This is not a boot for timid or relaxed skiers.

I was prepared to be let down by the 3 buckle Zzero after being overawed by its bigger 4 buckle brother. Instead I found a more pleasant-natured boot but still with an aggressive hard edge. This is a very capable boot and it handled the big skis well especially given challenging conditions. It is subsceptible to being overpowered if one is to back-seat ski fast down big slopes; in particular high-speed turns reveals its limitations. At slower to medium speeds, it is a capable, predictable boot. I will be honest and say that I did not have the same bug-eyed "oh wow" feeling after skiing this boot as I felt with its 4 buckle relative.

I will add that the 3 buckle Zzero offering does not feel as balanced as the 4 buckle version. The 4 buckle boot is stiff throughout while the 3 buckle boot has a relatively soft cuff but stiff forefoot. One cannot resort to leaning forward and pressuring the cuff while driving skis so an adjustment to skiing style is necessary. 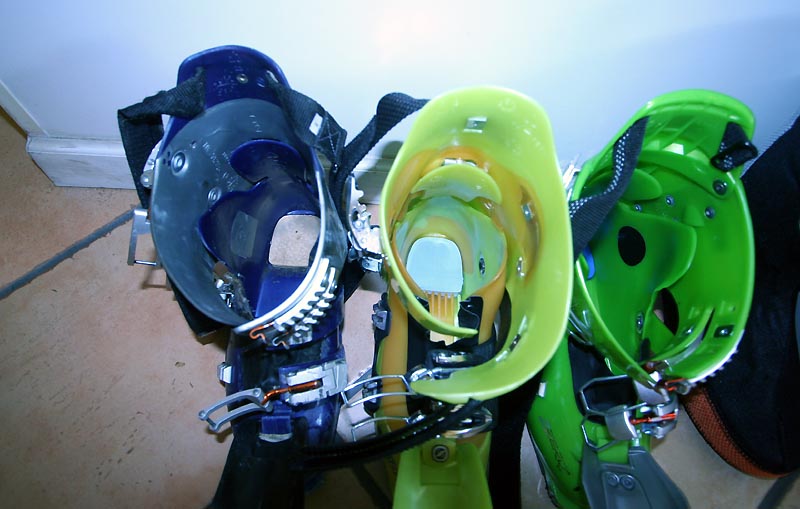 How Do They Tour?

This remarkably stiff boot does not tour badly at all. Of course, it’s hardly a tennis shoe but whatever they put in the water of those crafty Dynafit engineers works. The carbon tongue slides back and forth, imparting some give to the boot. I also found that I had to slack off all the buckles and undo the powerstrap to get a full natural stride as opposed to my usual method of merely undoing buckles from ski mode. This adds some time to transistions.

Hiking in this boot is not a joy. The stiffness of the sole, tongue and bootshell militate against comfort.

I did not have the opportunity to scramble rock on these boots.

As per expectations, this boot tours quite a bit better then the Zzero 4 buckle. Of course, the cuff is softer, lacking the extra buckle and one’s stride feels more natural. However, hiking in this boot is also no occasion for a party – recall that this 3 buckle boot is relatively quite stiff. 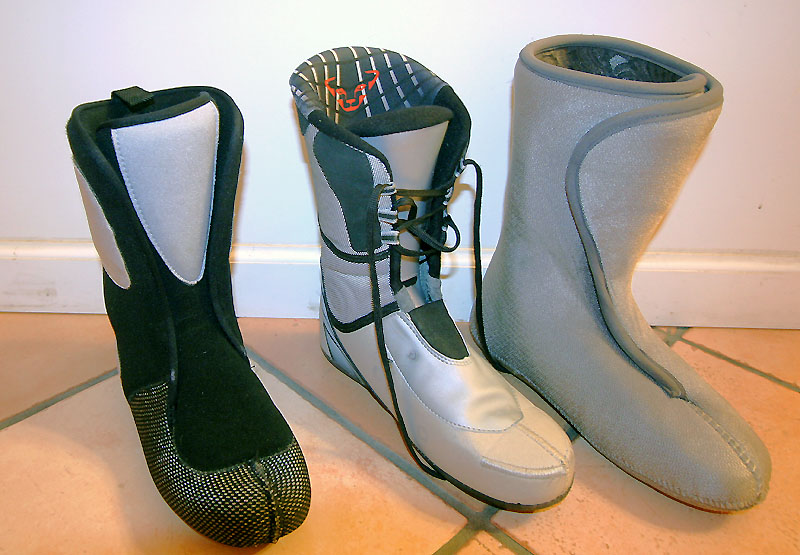 If you are a big and/or aggressive skier that drives big skis, get the Zzero4 carbon boot. If you are looking at getting a "quiver" of boots and want a big boot for slackcountry or yo-yo laps, get the Zzero4 carbon boot. If you are a light, finesse skier that wants one boot to do it all then perhaps either look at getting the Zzero4 in full Pebax and skip the carbon version (the Pebax version is supposed to be less stiff then the Carbon version) or get the Zzero 3 buckle. I found the Zzero4 buckle carbon to be a considerable leap in stiffness over the baseline boot – a Garmont Mega Ride. The Zzero3 buckle carbon is comparable in stiffness to the Garmont Mega Ride.

If you get these boots, be prepared to concentrate on skiing well and be prepared to drive skis hard. Neither suit lazy skiers or sloppy technique all that well. 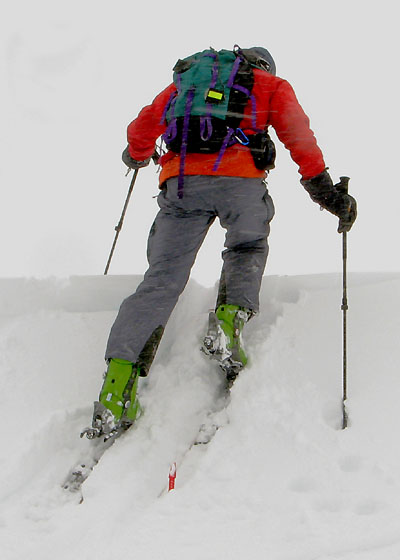