Words by Lee Lau. Pictures and video by Lee unless otherwise noted

The last time I wrote about Shames I raved about the terrain particularly the unbelievable uncrowded slackcountry. But it is so much more than that. It's about the people who come to ski Shames.

On our first day Sharon and I did a couple runs of the Prayer Flags run. This is a slackcountry run partially served by a t-bar. We then skinned up and over to "No Dogs".

Chris Willis and Rob Morris join us. Four years ago Chris was taking a sabbatical from starting up a company and responded to a post on an internet forum from Terrace local Gary Maltin who needed someone to house-sit. Gary mentioned Shames. Chris responded "huh?" and proceeded to google. A week later Chris was on a plane from Seattle to Terrace. Gary met him, stayed with him for one day, handed over house keys and Chris skied his brains out for 4 months. He hasn't been the same since. Since then his startup company has been wildly successful and he's managed to finangle some work and business in the area. This weekend's visit is a business trip. Chris and Rob are enjoying every minute of their on-hill meetings.

I then bump into Matt Lucas & Heather Laine on the skintrack and proceed to do an impromptu interview. Both 1.5 year Terrace locals, Matt is a reformed ski-bum who's spent time in Japan and Interior BC while Heather came from Vancouver and small-town Ontario. Both wanted a small town lifestyle but wanted to ski lots. Although both are professionals (Matt is a teacher and Heather a physiotherapist), they didn't want inter-generational mortgages. Matt found the $ 150,000 price for a modern duplex to be reasonable. They've found the community to be welcoming, the lack of secret stash mentality among local skiers to be refreshing and the absence of us against them mentality in the town to be genuine. They're both here to stay. 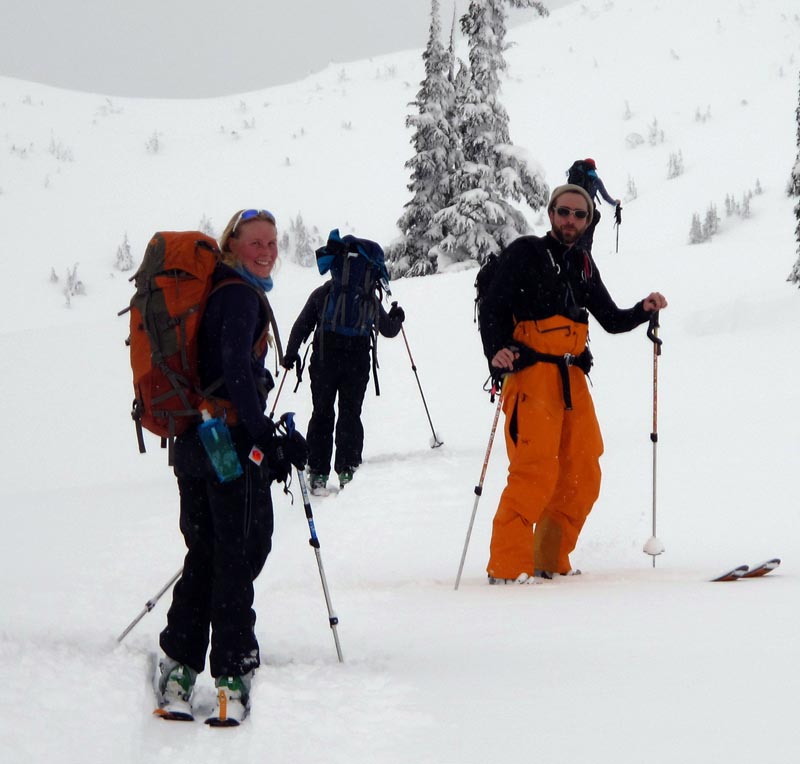 Matt – happy to be back from acl surgery. Heather – happy that Matt is no longer pouting on the couch 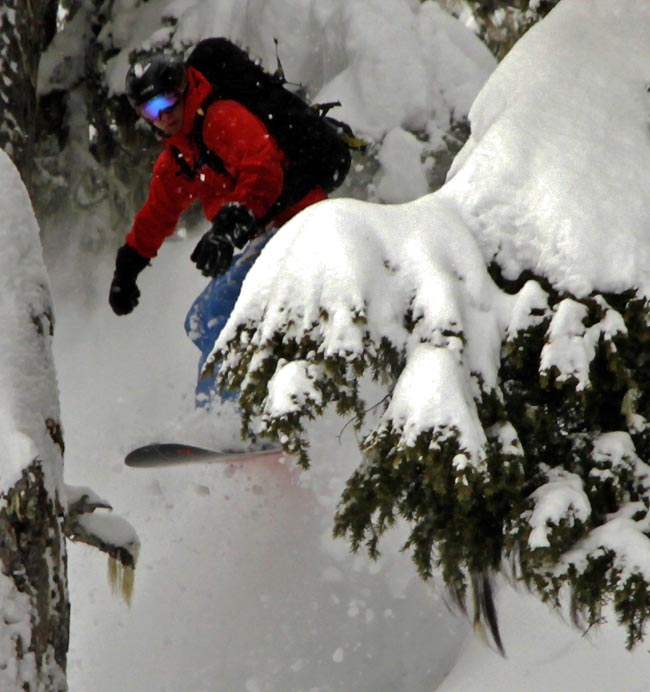 Tyler is visiting from Surrey, BC and finds the snow in "No Dogs" to be of acceptable quality 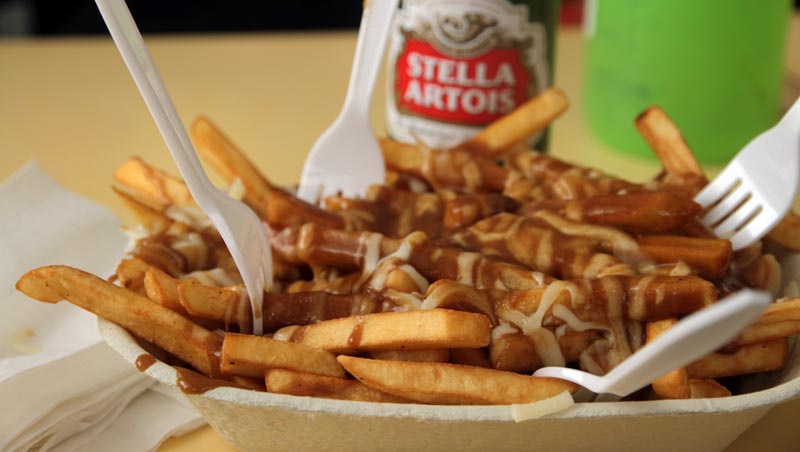 …. and the cafetaria poutine to be acceptably greasy

Christian Theberge is a maniacal Montreal Canadiens fan in a province of Canucks worshippers. Now living in a city which won the inaugural Hockeyville title, he's found that Terrace welcomes everyone; even Habs fans.

Christian was the mountain manager of Phoenix in a small Kootenay interior town in Grand Forks BC. He responded to the Shames general manager ad posting and figured he'd be a good fit since he came from the background of managing community-owned not-for-profit hills and didn't fit in with big real estate ski resorts. Christian admits that he was pretty surprised when the hill got hammered with snow and had to delay opening till Dec 16th (Shames opened with a 1.5m base and 2.5m of snow at top).

Since then Christian's had a pretty rocking good (but hectic) time as he's dealt with the logistics of a record snowpack which has seen Shames lead the world in skihill snow depth for over a 100 days in the 2011-12 ski season. He's been blown away by the community support from both the person-on-the-street (the Terrace, Rupert, Kitimat and BC Co-op owners), private (Rio Tinto Alcan, Prince Rupert Port Authority and many other local businesses) and government (City of Terrace) sectors. The vibe and stoke on Shames is pervasive and its hard to not feel how proud the people are of "their" ski hill as you ski the runs and use the facilities (cue the people who showed up to shovel metres of snow off the chairs before opening day). It's also not hard to sense Christian's pride and the genuine omnipresent good feeling as he greets many patrons by name.

As Christian takes in the crowd on Rio Tinto Alcan day at Shames and the enormity of the company's donation sinks in (the money will be used for new cable and chairs for the double lift) that he's and the patrons believe in the ski hill. 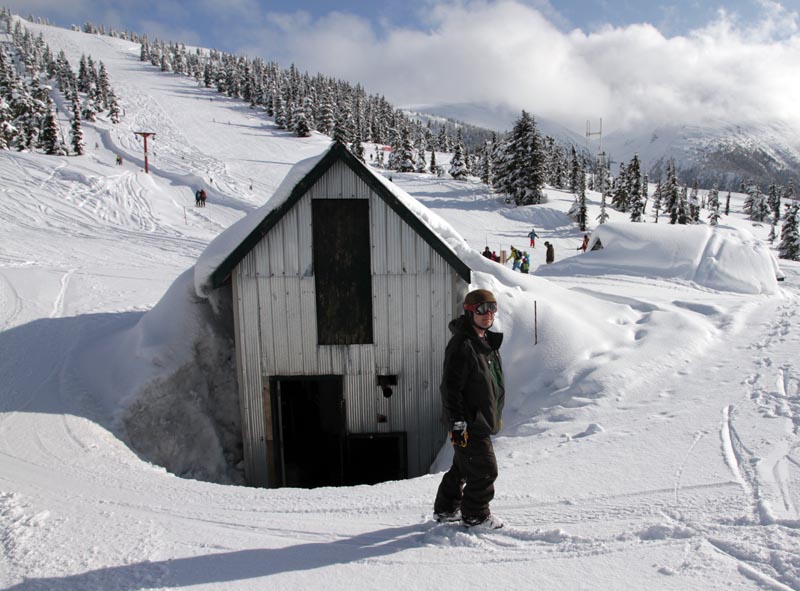 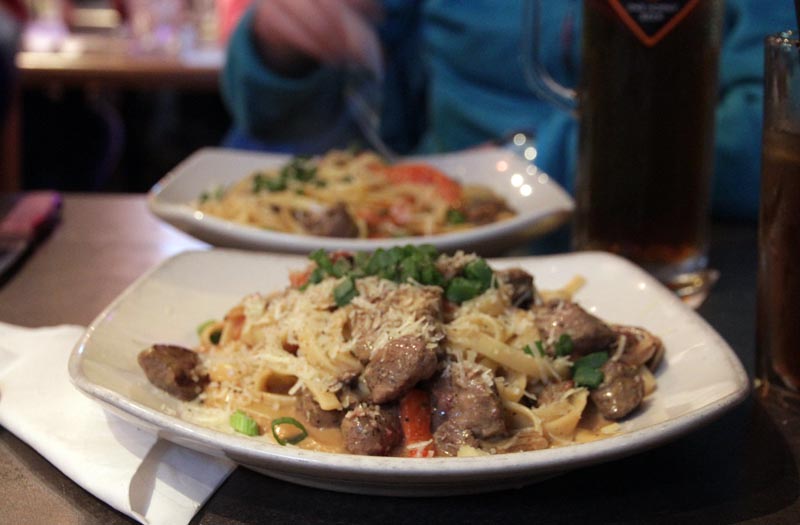 We were feted and dined well at Mr Mike's Steakhouse in downtown Terrace. Go there if you want food of superior quality

Rod Gee's a 24 year local. He's now an avalanche technician who's being buried under by work due to record snowfall in North-Central BC (his company, North West Avalanche Solutions does work for industrial companies and for work sites. Rod's a reformed ski bum who, much to his surprise, finds himself with house, basement full of toys, and an employer of many. His welcoming nature was immediately evident when we first visited Terrace in 2009 and he welcomed a bunch of backcountry skiing hippies to stay in his basement. Since then we've kept in touch and visited Terrace to bike and ski.

Rod is originally from Victoria. He loved skiing and cut his teeth in the field in Canmore and Interior BC. Life's wanderings led him to Terrace and when he found out that it was relatively affordable (this much has not changed) yet had winters with ridiculous snowfall totals he knew he found a home. As the person I know with the most time in the area I asked him why he thought the people in Terrace were so community-minded and so genuinely nice to complete strangers. Here are some of Rod's reasons and various insights he had for me:

1. Many people who move to Terrace move there because they don't want to be in crowded places and because they like the outdoors. Locals don't think about Terrace being in the middle of nowhere but being in the centre of everything important, to them. They're just south of massive icefields in NW BC and Alaska and within road-trip's distance of the Yukon. Frequent plane flights make getting to SW BC relatively easy. This commonality of mindset means that there's a feeling of everyone being in it together.

2. Space, space, space. The terrain around the Skeena-Babine area is HUGE. There's really not that many people up there. Because of that there are no real secret stashes. That concept doesn't seem to exist here. Even avid salmon fishers share beta. Sharon enjoys two day old powder on some of Shames's inbound runs. The Fay-zurs Chutes are in the backdrop 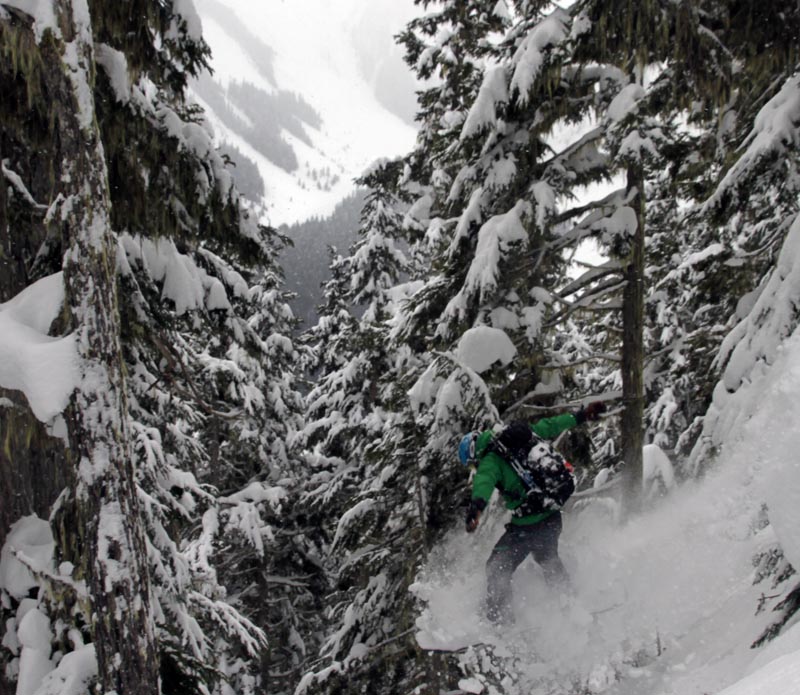 Rod and Christian said I should speak to some "Rupertites". It's pretty much settled that local visitors and an increase in skier visits from local visits will save Shames. Skier visits are down 6% approx from the decade previous average but are projected to increase this year. Shames breaks even on an operational basis but local patronage will help build a surplus for capex and reserve fund. Shames draws from Rupert, Kitimat and Terrace. Much less so from Smithers and the communities towards Prince George and very few visitors come from other places. When the local Prince Rupert ski hill closed decades ago (it was too low-lying for reliable snow) many Rupert locals "adopted" Shames as their own hill.

Trevor Denton is one such Rupertite. His parents were from Rossland and met on a ski hill. He met his wife Mary Bartlett (I knew Mary as she was also one of the original volunteers behind Friends of Shames) on a ski hill. Trevor spent time working and skiing in Jackson, Chamonix and Whistler but came back to Rupert for the same reasons that draw many people back; friends, community and the great outdoors and space of Central North BC. Rupert/Terrace is still affordable and in Trevor's own words, "I can live to work or work to live. I choose to work to live". Trevor and Mary are planning to start a family and I'd bet that the younger Denton will be skiing (in Shames) in no time. Trevor Denton in his natural environment 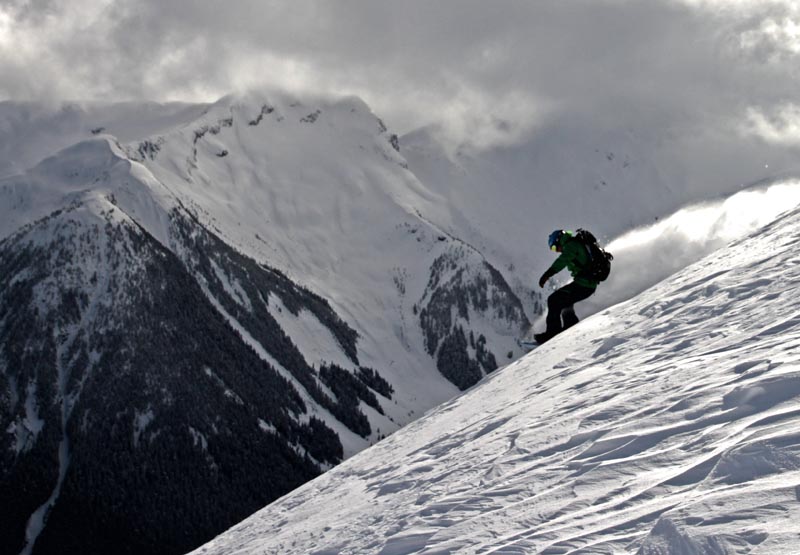 Gavan knows that he's a long way from County Galway

Sharon drops into one of the many Shames slackcountry bowls


Another story illustrates the way things are in north-central BC.. A friend of ours flew Air Canada, his luggage was lost and consequently he didn't have touring boots but had skis. We go to the local Terrace outdoors store. The woman at the counter immediately starts phoning around. She knows the boot size of everyone who tours in town and whether they're away or not. What's more amazing — people call back and the wife of someone who's away offers to lend her husband's boots out. We drive to her place and grab the boots and ask if she thinks her husband will mind. She tells us not to worry and that he'd do the same thing with her boots if someone else had the hard luck with airline.

Terrace (and the surrounding towns) is that kind of place. I'll be back and if you're reading this article, I hope you'll get a chance to experience it yourself.