In Early January 2012 a weather station west of Terrace in North Central British Columbia located in a station 5 meters above ground was lost. Buried by a storm. The station is at 700m elevation (that's 2300ft in American or 84 cubits if you're some other uncivilized non-metric country). At 1500m, the snowpack doubles. At 2000m the snowpack triples. No-one kept exact records (no weather stations are up there) but snowpacks of 15 – 20m were rumoured this season.

By March avalanche technicians working in N Central BC hadn't slept all that much as storm after storm after storm had laid waste to the North Coast. Snowpacked peaks in April. By then avy techs were completely burnt out and needed all the kegs you can ship up there. 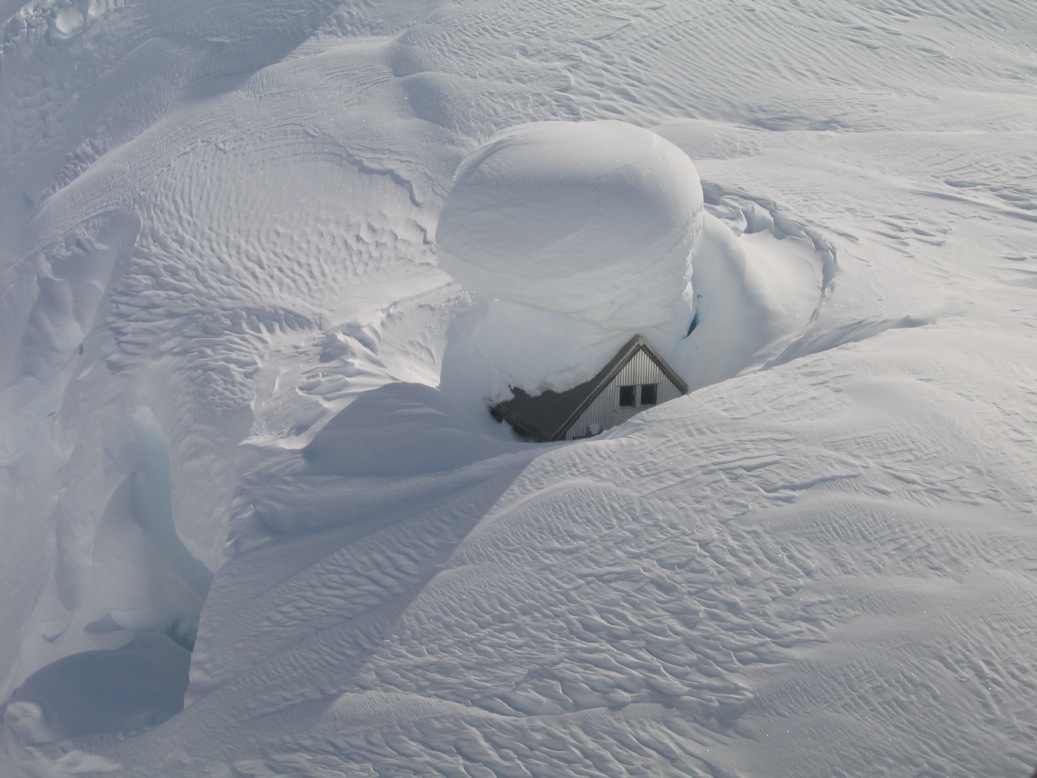 Steel-framed power station on the Terrace – Kitimat Pass. This station is located at about 1800m at treeline. Snowpack is bigger than this in alpine


Shames Mountain is the local ski hill in Terrace. For over 100 straight days in 2012 this little hill (400m elevation; 1 double chair, 1 T-bar) held the snowfall/snow depth record for the world's ski hills. This little gem in North Central BC is visited mostly by locals from the surrounding area of Terrace – Rupert – Kitimat. With approximately 30,000 skier visits per year. Shames almost didn't happen this year. As recounted in a previous article, the private owners of Shames who had been running the ski area for over 20 years were approaching retirement age and wanted out. Outside investors were interested but the previous owners wanted to keep ownership local and, if possible, to maintain the skier-centric nature of the place. Eventually a grassroots community effort succeeded in raising the purchase price, a bit more money to fund and start operations and another bit of money to maintain capital equipment at the ski hill. 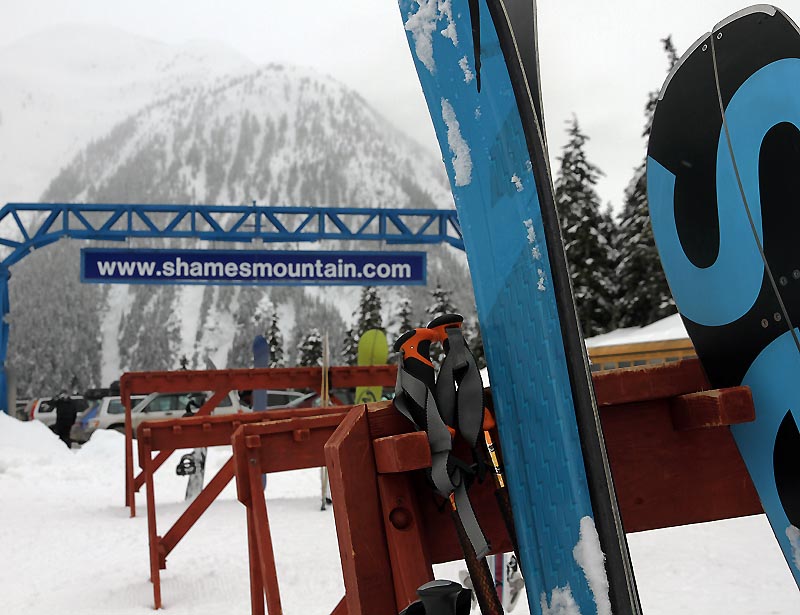 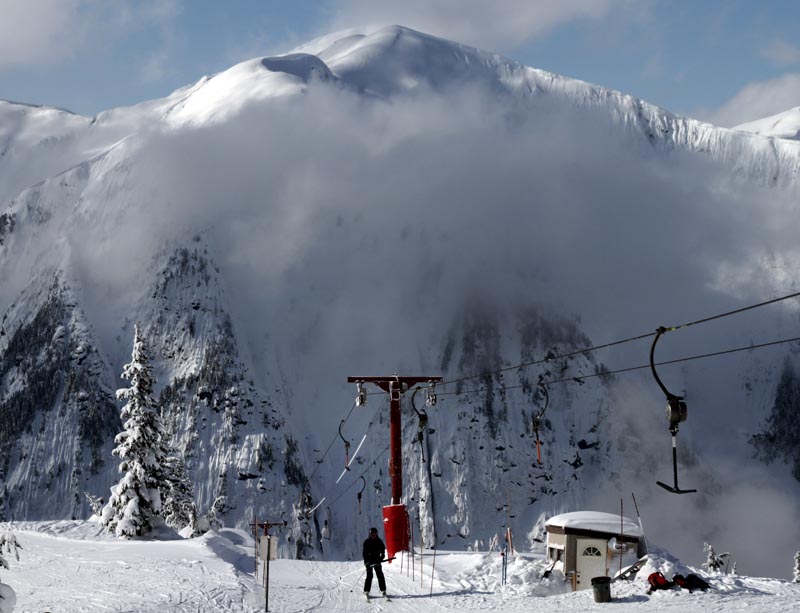 The world's most scenic T-bar


Sharon and I first visited Shames (and immediately fell in love with it in 2009). Since then we've revisited the area in summer and enjoyed biking in North Central BC. I volunteered some time with the Friends of Shames volunteer efforts when they first initiated their volunteer effort to save the ski hill and was thrilled when a press release went out on Nov7, 2011 announcing that a community-owned Co-op (My Mountain Coop) had sucessfully purchased Shames from the previous owners.

Buying a ski hill is one thing. Operating it is quite another endeavour. A mountain manager had to be hired (more on Christian later in the article); long-neglected repair work had to be undertaken; community relationships that had been neglected had to be repaired; a sno-cat had to be replaced. Mundane but important details such as negotiation with long-term public and private debtors anxious to hear what plans were afoot to repay bills had to be started.

To top it off, record snowfall hit and delayed opening by a week. A groundswell of community support saw local skiers drive up to the hill and take it upon themselves to clear off snow, help hang chairlifts and repair buildings and dig our buried equipment saw Shames's opening weekend of the 2011-12 season hit record numbers! 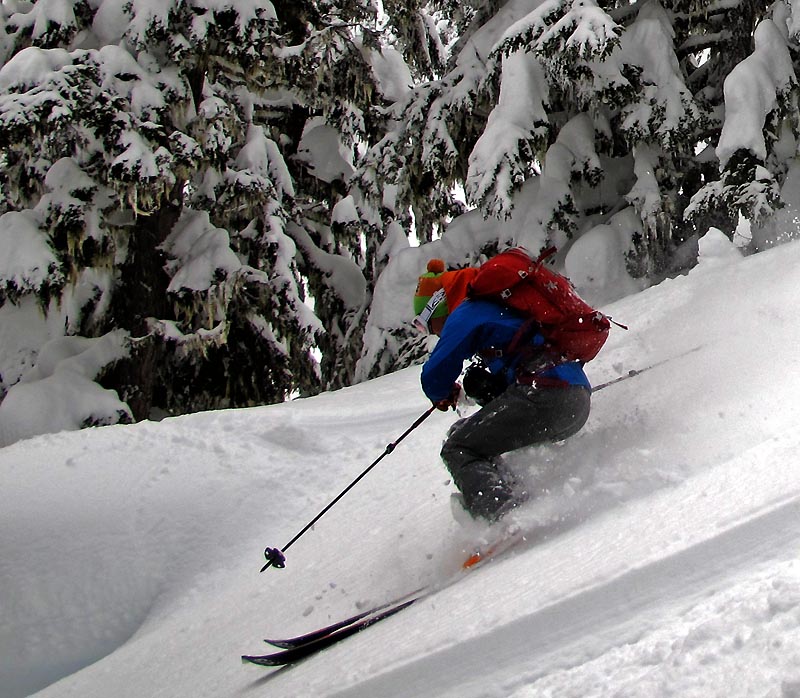 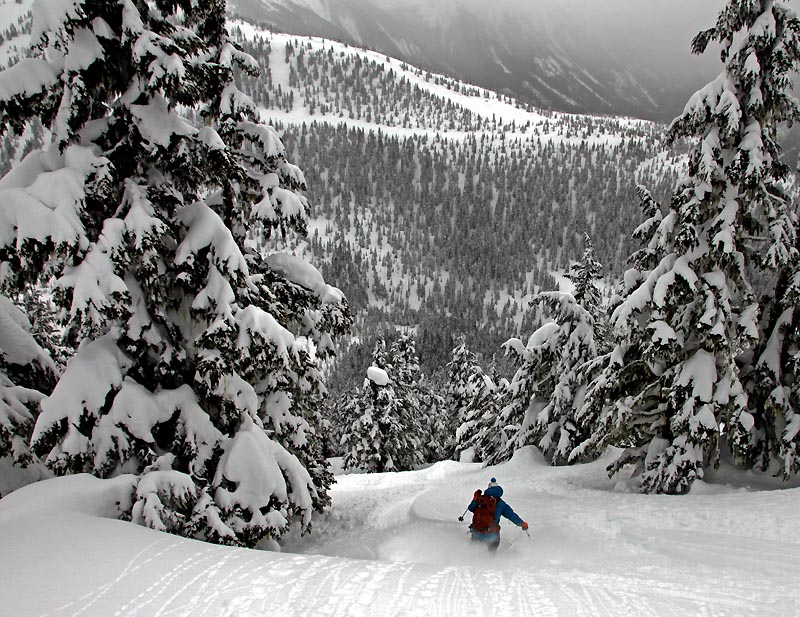 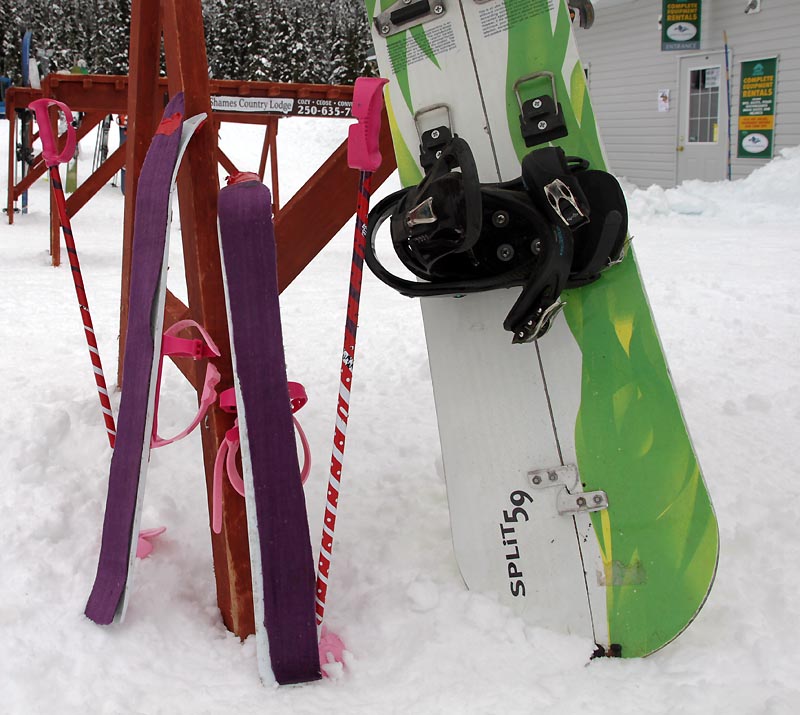 Friends of Shames – A Skiers Journey by Jordan Manley – used by permission. You haven't felt community spirit till you've seen this video

Shames operationally runs at break-even and has done so for a number of years. However, the problem is that there is no cash cushion for capital upgrades. The lodge could use some improvements for example. Accordingly, the Co-op has been soliciting donations and participation from the community and from corporate citizens. As I mentioned before community support has been overwhelming with many area businesses donating time, services, product and dollars. Notably the City of Terrace donated $15,000, the Port of Prince Rupert donated $50,000 and to top this all off, while we were visiting, Rio Tinto Alcan donated $175,000.

The Co-op president, Curtis then proceeded to announce that with this funding an order was placed for new double chairs.It's refreshing to see a ski hill being operated by skiers for skiers. No fancy condo developments. No time-share shills. With this kind of community support and backing it looks like Shames will be around for a long time to come. 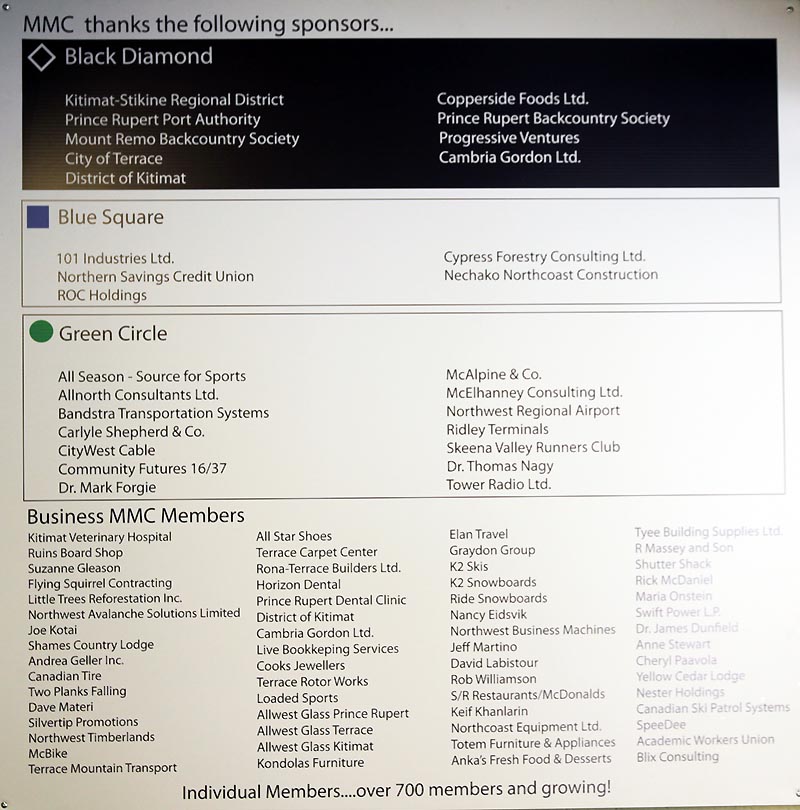 Prominently displayed in the Shames base lodge – all the supporters 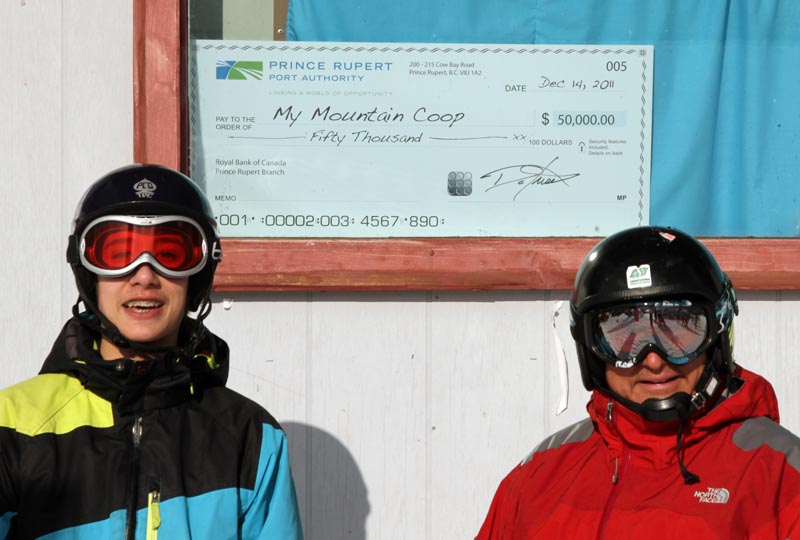 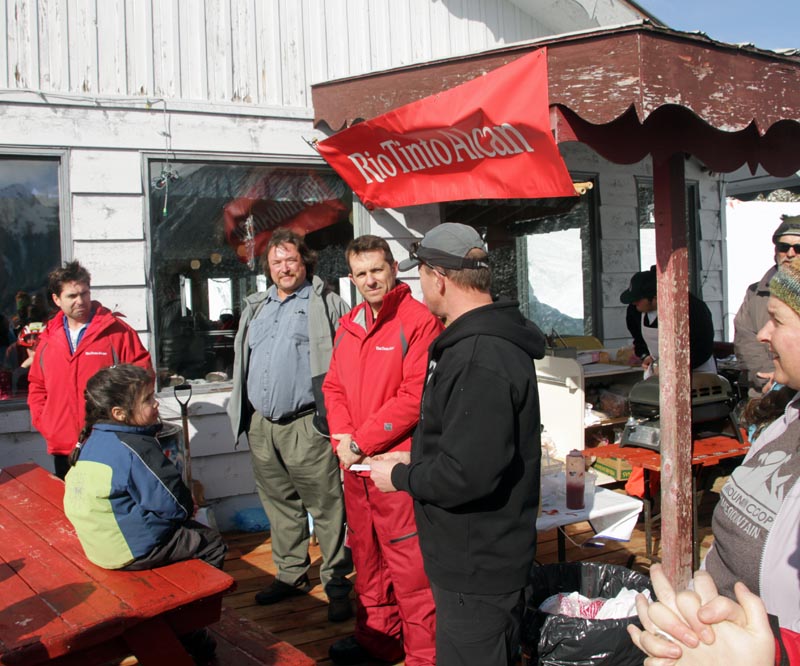 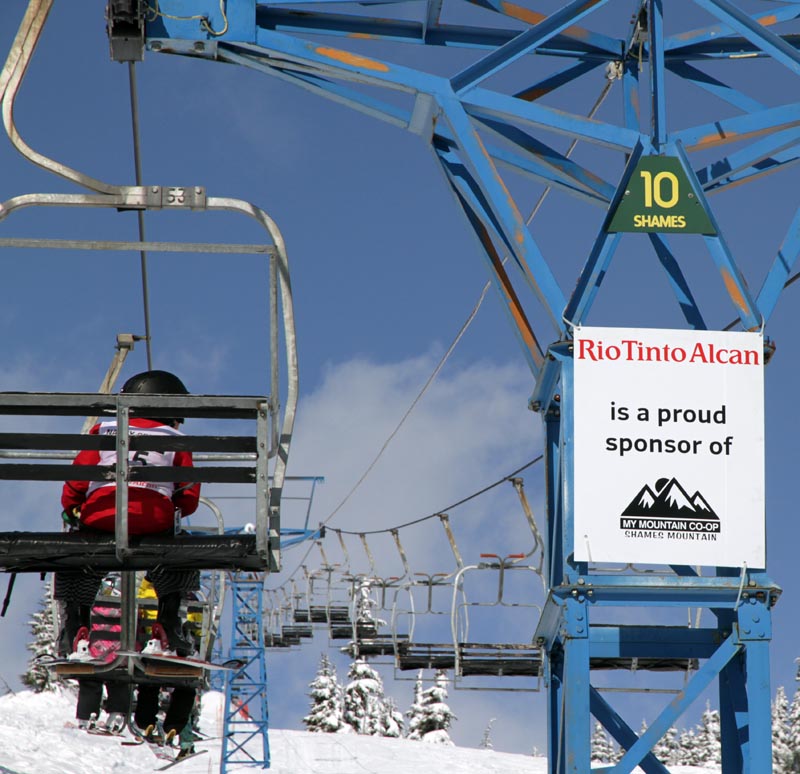